Chotul.com – Here's everything you need to know

After many years of incremental delays, director James Cameron finally looks ready to deliver the goods on his long-awaited sequel to “Avatar.” It’s been something of a running gag among film fans that the movie would simply never see the light of day, but the December 2022 release date seems to be locked in. And to dispel any lingering doubts, Cameron debuted a new trailer at this year’s Cinema-Con to prove the movie was real.

Set more than a decade after the events of the first film, “Avatar: The Way of Water” begins to tell the story of the Sully family (Jake, Neytiri, and their kids), the trouble that follows them, the lengths they go to keep each other safe, the battles they fight to stay alive, and the tragedies they endur.

Jake Sully lives with his newfound family formed on the planet of Pandora. Once a familiar threat returns to finish what was previously started, Jake must work with Neytiri and the army of the Na’vi race to protect their planet. 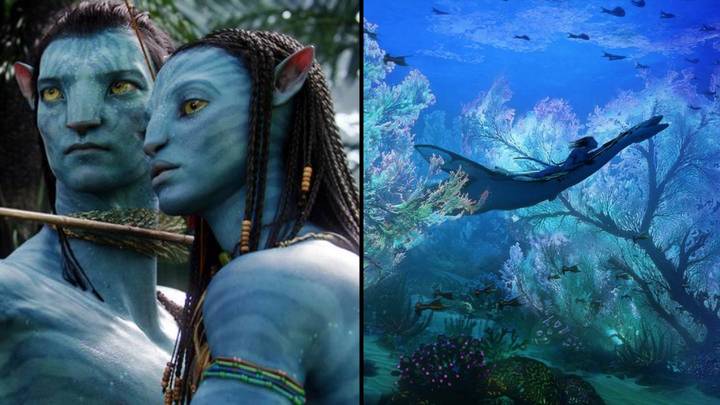 We got a first look at the trailer for “Avatar: The Way of Water” – here’s what we learned and what remains unknown about Cameron’s follow-up to the highest-grossing movie of all time.

First Impressions
James Cameron said the “Avatar” sequel would make you “shit yourself with your mouth wide open.” While my garments remain mercifully unsoiled, I can say this: it was certainly great to see dazzling images on a huge silver screen with sound I could feel. 3D has been something of an afterthought over the past few years of theatrical distribution – especially since returning from the pandemic. It was exhilarating to be fully engrossed in the full, multidimensional spectacle of Pandora once again … even if only for 105 seconds.

What We Now Know
The trailer leans in heavily on visual splendor, showcasing the resplendent beauty of the digital landscapes with soaring aerial photography of the Na’vi in flight. (Although Cameron also gives us a solid close-up of Zoe Saldana’s Neytiri, a flex that he does not have to cut away from the effects work to hide its quality.) There are plenty of creatures and geographical features that will look familiar, from the winged mountain banshees to the rocks and vines seemingly suspended in the sky.

But even this sneak peek of “Avatar: The Way of Water” teases that we’re going to go somewhere we’ve never been before. Chiefly, underwater. Back in 2018, producer Jon Landau said the sequel would explore Pandora through the water, and this trailer delivers on that promise. There are many giant sea creatures not seen in the first film, including one that dwarfs a swimming Na’vi with whom it appears to hold hands. These are teased more than they are explained, but the trailer indicates that this whale-like organism is something the Na’vi can ride – and the camera tracks this motion briefly but breathtakingly.

Underwater also gives us the first glimpse at Kate Winslet – or at the very least, it’s an absolute dead ringer for the Academy Award-winning actress. She appears to be a Na’vi with an extraordinary ability to breathe underwater; the short glimpse of her character Ronal showcases her totally at ease deep under the surface. This would also track with the details that Landau gave about Winslet’s commitment to the part back in 2018: “Kate was able to hold her breath for more than three minutes underwater, capturing performance. She just made this look so easy.”

There is but one line spoken in the trailer, and it comes from the mouth of Sam Worthington’s Jake Sully: “I know one thing: wherever we go, this family is our fortress.” No, Cameron didn’t just steal that line from a “Fast & Furious” script – although maybe Vin Diesel gave him some pointers on set. As far back as 2013, Cameron said the sequels would be “a family saga like ‘The Godfather,’” and the trailer seems to indicate that he wasn’t just bloviating about his thematic ambitions. Beyond the majesty of Pandora in the trailer, there’s also the intimacy of family moments.

The only real look at the film we’d gotten prior to the trailer was the reveal of Spider, the human adopted son of Jake and Neytiri. Apart from those two familiar characters, Spider gets the most face-time of anyone in this first trailer. Young newcomer Jack Champion leans into a kind of feral intensity, and his nimble movements create an almost combustible screen presence that already feels overpowering. If there’s any kind of prediction one can make from the handful of shots selected to represent “Avatar: The Weight of Water,” it’s that they see Champion as the potential breakout star of the film.

What Still We Don’t Know
There was not an immediately evident sighting of Stephen Lang’s treacherous Colonel Miles Quaritch, who Cameron claimed would be the villain across all four sequels back in 2017. There was also no sign of Sigourney Weaver, whose character Dr. Grace Augustine died in the first ‘Avatar’ but might be playing a different character. New cast members such as Diesel, Michelle Yeoh, Edie Falco, and Jemaine Clement were also not clearly identified in the trailer as well.

It’s also unclear as to what, exactly, the specific conflict or tension in the sequel will be. (Honestly, the purpose of the teaser seems mainly to remind people that they once went bananas for this series.)Quick flashes of fighting in the trailer seem to indi

Full Review: Doctor Strange in the Multiverse of Madness (2022)